When we lived in Germany in the late 1980’s, we would take weekend trips to different parts of Germany and surrounding countries. If we were within range of AFN stations we would try to listen to them. The blog below captures some of our experiences in listening to AFN stations throughout Germany.

(NOTE: Be sure to scroll all the way to the bottom to see all of the QSLs and clips. You will need to click on the arrows to hear the audio clips. ) 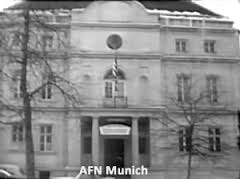 When we lived in Southern Germany, AFN Munich was the station we listened to most often. There were several stations in their network. The QSL is for their 1107 kHz outlet. 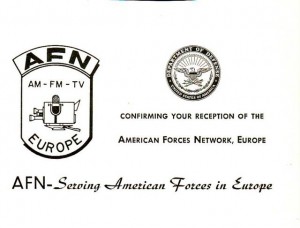 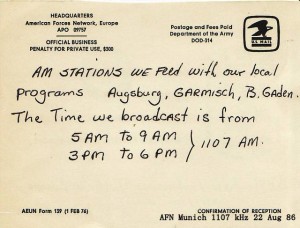 I remember listening to AFN Munich on a local transmitter while in Bad Tölz, so I believe there may have been a transmitter there as well, or perhaps it was just a good signal from the Garmisch-Partenkirchen outlet. In any event, I can’t find a reference to a station there.

AFN Frankfurt first came on the air in 15 August 1945 and signed off in October 2013 after the reduction of US troops in Germany. 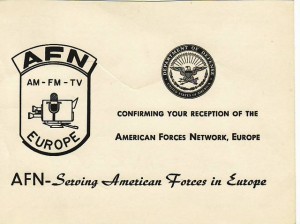 Being on a relatively clear channel, they were an easy catch in southern Germany. This QSL was for a report of the 873 kHz channel.

AFN Frankfurt on 873 kHz is the only AFN station that I have also heard in here in Maryland. 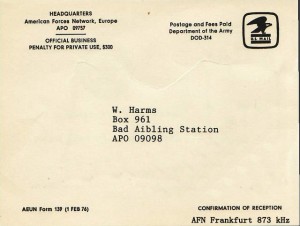 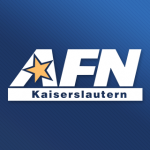 This clip was recorded on our July 1989 trip. The program was from AFN Kaiserslautern and the transmitter was located in Karlsruhe (1143 kHz 1 kW). This transmitter is now off the air. Another AFN station is also heard on the clip underneath the stronger signal from Karlsruhe. 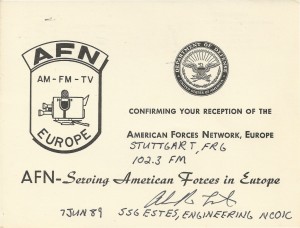 We heard this AFN outlet while driving on the nearby Autobahn on our June 1989 trip. They sent this full data QSL card in return for my reception report. 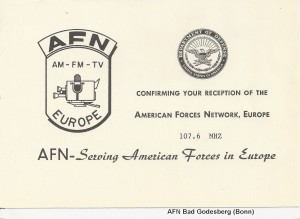 This is another AFN station that we heard on our July 1989 trip. I don’t think this outlet had its own local programming, but instead relayed programming 24 hours per day from AFN Frankfurt. They sent this QSL for my reception report to AFN Headquarters. The transmitter was located in Bad Godesberg.