above graphic by Ericmetro [Public domain], via Wikimedia Commons 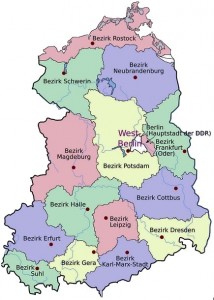 Stimme der DDR (Voice of GDR) was a radio program for German speakers who lived outside of East Germany. The programming consisted mainly of political, information, culture. On 15 November 1971, it was established as a result of the merger of Deutschlandsender and Berliner Welle. In 1990 after the two Germanys united, Stimme der DDR ceased transmissions and its facilities were absorbed by other German broadcasters.

Their medium wave outlets were all audible in our home in southern Germany, and I managed to also receive their shortwave outlet on 6115 kHz. I heard one or two of their FM outlets during a trip to Berlin. You can see the QSL cards they sent for my reception reports below.