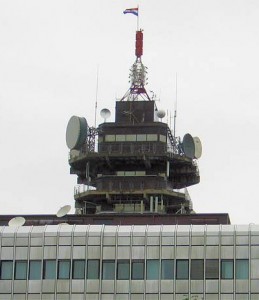 Above logo courtesy of “Radio Televizioni Shqiptar” by Kj1595 – Own work. Licensed under CC BY-SA 4.0 via Commons

Radio Tirana is the name of the radio services which are operated by the Radio Televizioni Shqiptar (RTSH) (English: Albanian Radio and Television), the public broadcaster for Albania. RTSH traces its roots back to 23 November 1938 when Radio Tirana was founded. Television was launched in 1960.

The external service of Radio Tirana played a fairly important role as international broadcaster during the Cold War. However, the programs had a reputation as being rather dull. Since the end of the Cold War, the programming has improved, and they are a DXer friendly station.

When we lived in Germany, Radio Tirana was an easy catch on both medium wave and shortwave. They were fairly easily received when we lived in Korea. I have picked them up here in Maryland on medium wave occasionally. They sent the QSL cards below for my reception reports.