Antenne Bayern transmits its programs over a network of transmitters throughout Bavaria (Bayern). After a period of test transmissions in the summer of 1988, they went on the air with their first official broadcast at 0600 Central European Time on 5 September 1988.

I sent a reception report for the first hour of their first official broadcast. In return, they verified my report and sent 10 stickers, each with a different frequency. You can see copies of the verifications and the stickers below. Additionally, I recorded a couple of their test transmissions. Check them out below. 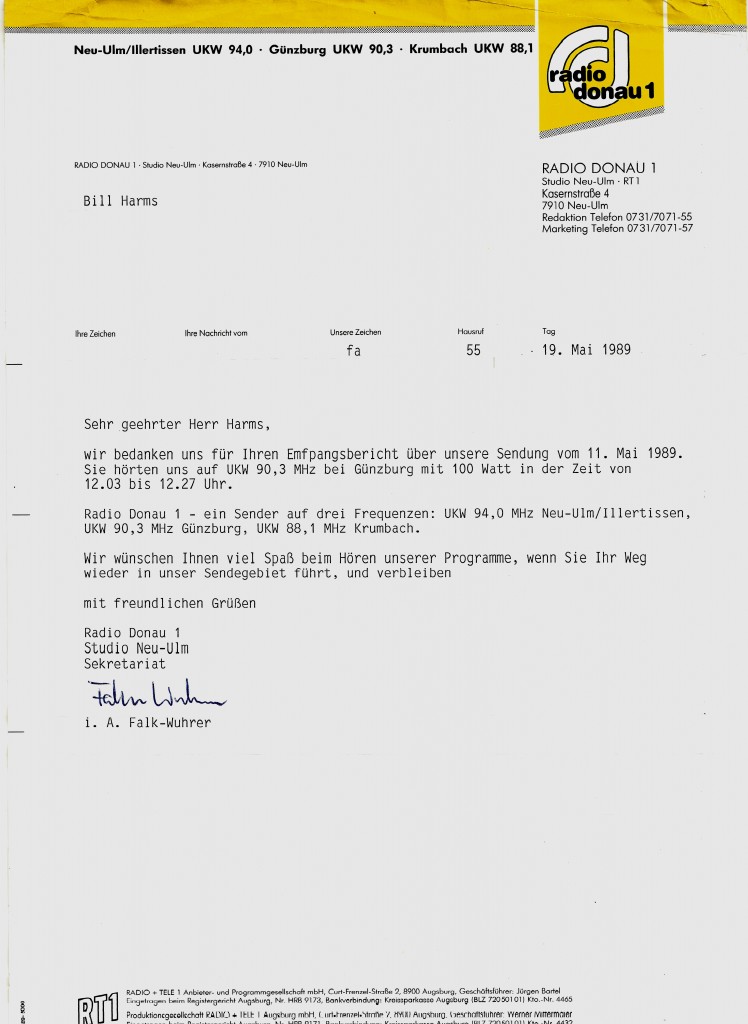 Radio Donau 1 was a low-powered (100 watts) station located in Neu Ulm, Germany. We heard it on 11 May 1989 while driving through.  The frequency was 90.3 MHz and the transmitter power was 100 watts. The transmitter was located at Günzburg.

We heard this local radio station on 99.1 MHz at a campground in Balzers, Liechtenstein. According to the verification letter, the studio is in Buchs, Switzerland and the transmitter is located at Buchserberg. They were broadcasting a locally produced program with folk music when we heard then.

At the time there were no local stations in Lichtenstein and this was the closest one to it.  The station first signed on the air on 2 June 1986. Radio Gonzen became Radio Ri for a while, and is now the station is called Radio FM1 Buchs.

We heard Radio Aktuel when driving through the St. Gallen area. Even though their transmitter was low-powered, it is interesting that they had a form letter verification printed out.

Their transmitter was located in Rotmonten.

Below is a clip of what we heard.  It was station identification into news.  Take a listen.